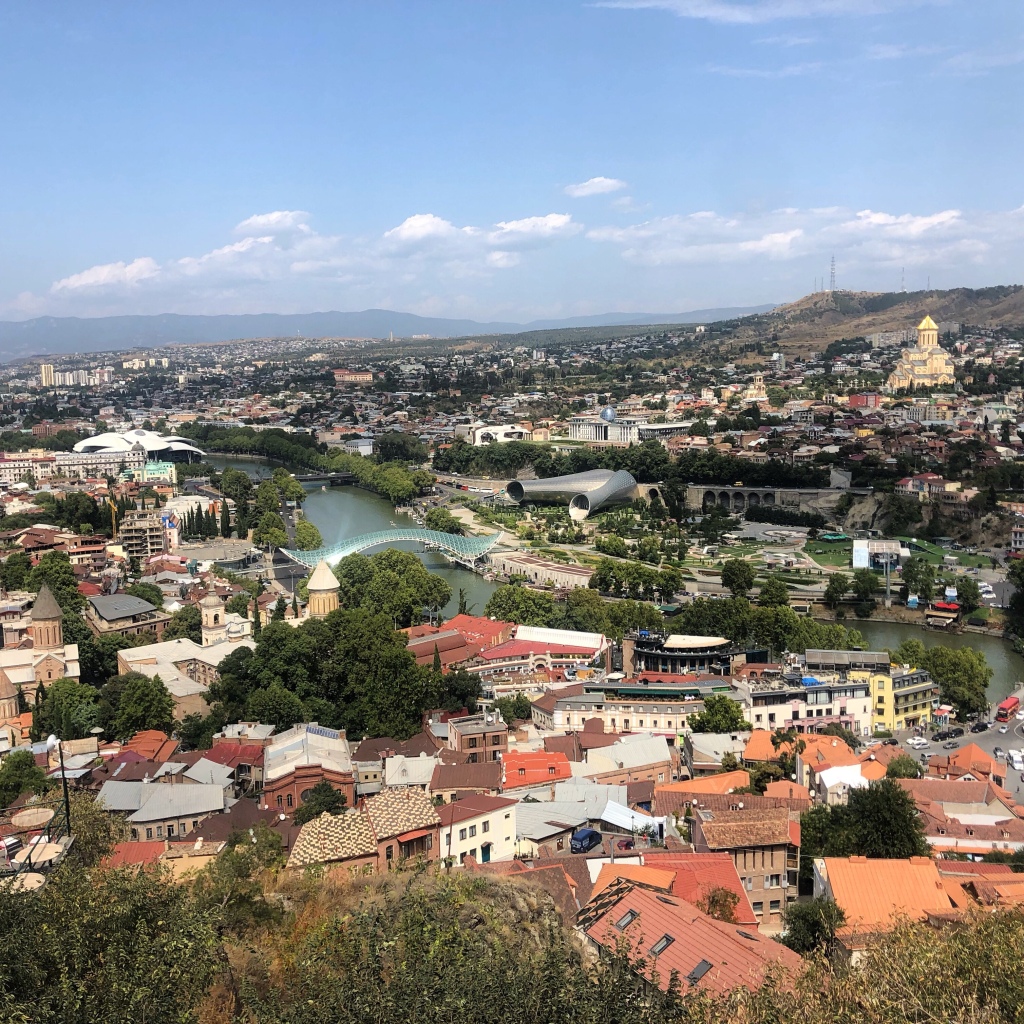 Where In The World Is Georgia?

Now, for those of you like me that do not actually know where Georgia is on a map – don’t feel bad. I didn’t either.

This beautiful little country is nestled in between Europe and Asia, is the birthplace of wine, has incredibly difficult consonant sounds in their language, was part of the silk road, and is home to a lot of religious history and churches. Georgia is known for their multitude of terrains and landscapes, from the mountainous regions of the Caucasus mountains, to the beaches of the black sea, to even sub-tropic regions.

Georgians take immense pride in their religious history, alphabet, and wine. Georgian polyphonic singing is on the Representative List of the Intangible Cultural Heritage of Humanity in 2008. In fact, Georgian pholyphonic songs were sent into space in case other life forms made contact. We were lucky enough to experience this at our farewell dinner. Even though we had no idea what was being said in the songs, they were rich and soulful and moving.

What Exactly is Georgian cuisine?

Great question. Is it truly a mix of so many cultures because of its location on the silk road. We had tomato and cucumber salads (the best we’ve ever had) with Greek and Mediterranean influence, to more persian and turkish eggplant and meat dishes to even a little bit of Asian influence.

Herbs and spices like parsley, coriander, dill, and garlic with nuts are very commonly used.

Some of the traditional dishes that we ate were:

Wine is a way of life in Georgia – it was born there in the 4th century! We drank an obnoxious amount of Georgian wine. Here in the states we are used to drinking classically made wine. Traditional Georgian-made wine is a tad different, as it is made completely in terra-cotta clay pots from fermentation to storage. It has a much higher level of tannins than most of the wines that we drink in the states, and they have a special variety of wines called Amber wines (they are golden in color and quite beautiful). Some people really enjoy it, others did their best to try to enjoy it. We visited wine makers, talked to sommeliers, competed in a wine competition. Wine started at 11am and lasted until the night was over.

Our tour guide Sophie told us that we were really nice, really sleepy people – and rightfully so. We didn’t get much sleep and we had activities all day every day. Whenever we thought that we couldn’t hang, our couldn’t eat another piece of Khachapuri (cheese bread), or couldn’t drink another glass of Georgian wine, or wasn’t sure about going go karting in the mud and rain, or (for me specifically) couldn’t walk into another 14th century church – our resounding statement was “Everything is Fine”. Because everything was fine. And people’s true colors really shine when under duress, or when passed another shot of chacha (Georgian clear brandy – stronger than Russia Vodka, made from the skins of grapes) .

Over the course of the trip as we got to know each other better, everyone was bestowed a nickname that was somehow related to the trip and their personality. I can’t seem to escape the Mom nickname, so I am now proudly called “Mama Chacha” since I was the person making sure that everyone had pictures and were happily taking their shots of chacha.

They all have a special place in my heart.

Did I Pick The Right Trip?

The purpose of random walks is to spend time with your future classmates while getting to explore a part of the world. The idea of spending each waking moment of 9 days with people that you don’t know is daunting, because you simply don’t know what to expect. Will I like everyone? Will they like me? What if the trip isn’t as great as I imagined it being?

Reflecting on mysteryland, I could not have been more blessed, because once we were all together none of those doubts or questions crossed my mind. I would like to think that I got pretty lucky with my group. We ran the gamut from engineers, to members of the armed services, to lawyers and consultants from all over the world. Over endless food and wine tours, outdoor activities and constant laughter, I came back to the states not only knowing 15 of my classmates, but with 15 new friends that I may not have known otherwise.

According to Georgians, life is about family, friends and wine (sometimes chacha). Listen to the end of this video to hear the beauty of Georgian consonant driven language.

Overall, the trip was unbelievable. Stay tuned for my next post on our journey to Kazbegi.

iThere are no comments

Friends - I know it’s been a long time, but @mbatheblog is back!! Sorry for the wait 😅 check out my first post back - link in bio
There are some things worth fighting for - available, adequate and accessible funds for all entrepreneurs to pursue their entrepreneurial dreams is one. Check out my our founders new blog post on the work that she is doing with KINETIC and why she’s hosting KINETIC-CON on April 10th!
Applying to business school? Let @mbatheblog founder @morganalexarose help you get in with @ivygradservices !
@yokwaku is the swaggiest sports marketer at Booth. Check out his story from the Bronx to one of the biggest CPGs in the world!
Alex is the most bad ass woman in Booth’s Class of 2021. Her story from protesting to traveling the world to opening up an art gallery makes her the unbelievable woman that she is. And she’s just getting started!
Things never go exactly as planned. Be focused on your goals and dreams, but flexible in how the journey looks.

Begin typing your search above and press return to search. Press Esc to cancel.